The Internet of Cows: How IPv6 is Expanding Connectivity

IPv6 is a new internet protocol created due to the lack of space in IPv4 addresses caused by the explosion of internet-enabled devices.
June 6, 2019
Reverse IP Lookup, Technical

No, that’s not a typo in the title, and I promise it’ll make sense when you’re done reading this.

We can’t talk about IPv6 without first explaining what exactly an IP address is. Internet Protocol (IP) is the core foundation of the internet allowing devices to connect and transmit data.

Much like a phone number ensures your call goes to the right person, an IP address is a unique number assigned to an internet-connected device that ensures proper routing of information – so when you’re watching Game of Thrones on your laptop, it doesn’t play on your neighbor’s TV (for more information about IP addresses see our article What is an IP Address?).

The most commonly used address protocol is IPv4. It has become the backbone of business network infrastructure due to its relative simplicity and (until recently) its availability.

An IPv4 address is a string of numbers composed of four sets of three digits, called octets. This is what an IPv4 address looks like:

IPV6 – The Future of IP Addresses

IPv6 is the next generation of IP addresses. First launched in 2012, this new version was created, frankly, because we ran out of IPv4 space (we’ll explain why later). 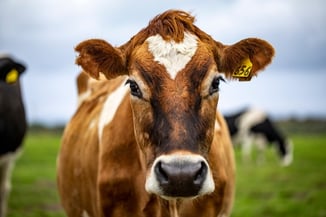 There are a limited number of IPv4 addresses in existence – roughly 4.3 billion. This might sound like a lot, but with the explosion of internet-connected devices (mobile phones, cars, smart TVs, appliances, and yes, even tracking systems for cows) it is estimated that by 2020, roughly 50 billion devices will be connected to the internet. Suddenly that 4.3 billion starts to look a whole lot smaller.

From an end user’s perspective, this change won't mean anything. Devices like your smartphone are already using IPv6 natively without any issues. But the variety and number of internet-connected devices will almost undoubtedly continue to grow at an exponential rate, thanks in part to the space provided by IPv6 addresses.

As IPv6 usage continues to grow among businesses and individuals, it is important for B2B sales and marketing teams to plan for this shift now so there aren’t any big surprises down the road. Enhancing your website’s IP address lookup capabilities to handle IPv6 traffic will not only give you better insights about your target accounts, but will also prepare you to deliver personalized content and better user experiences as the future of internet traffic evolves.

Want to know more? Check out our comprehensive KPV6 Guide for more information.