Ad fraud is a problem that has plagued the digital marketing world for years, but it's time to put an end to it. Find out how you can protect yourself.
November 14, 2019
IP Address Intelligence, Marketing, Digital Marketing

This year alone, marketers will lose about $6 billion to fraudulent ad activity, and the worst part is, they don’t even know they’ve been scammed.

Now you might be thinking this doesn’t apply to you, but if you’re including any sort of digital advertising into your marketing strategy, a substantial part of your views and clicks may be coming from fraudulent sources.

In fact, a 2019 fraud detection study by White Ops, found that around 20-35% of all online ad impressions were fraudulent. With the estimated value of the digital advertising market expanding to around $225 billion this year, it’s easy to see why this is such a lucrative target for online scammers.

In this article, I will dive into the vast world of ad fraud and show you 5 ways to combat it that will save you money and get your ads in front of the right (human) eyes.

What is Ad Fraud?

Ad fraud is a broad term for the practice of falsely generating impressions, clicks, likes, traffic, etc. from “fake” sources in the pursuit of charging advertisers more for ad placements on search engines or websites. Fake sources can come in a number of forms but some of the common ones are: 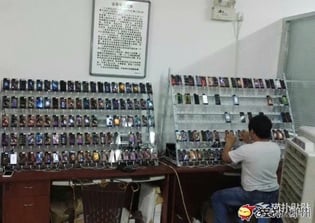 Click Farms: These can be small one or two-person scams all the way up to large scale sweatshop-like operations with hundreds of people generating fake likes, clicks, downloads, traffic, etc. The setup works like this: a large bank of smartphones or computers are housed in a location with a person, multiple people, or algorithm operating each device (i.e. clicking, liking, going to web pages, etc.). The activity from these devices looks like real human interaction because in many cases it technically is, it’s just not the human interaction you want from your ads, as it will never lead to any sales and simply serves to drain your ad budget.

Bots: The term “bots” refers to programs or algorithms that have been automated to view, click or otherwise interact with online ads in order to increase views, traffic, clicks, etc. Think of it as a click farm on steroids. While click farms may be able to gather hundreds or thousands of interactions per day, these bots are capable of generating millions of actions per hour, and what’s worse – they’re smart, sophisticated, and hard to detect.

One of the most famous and profitable bot-driven ad fraud programs, called Methbot, operated from 2014-2016 and at its peak generated an estimated $3-5 million per day. This incredibly elaborate program operated by a group of Russian scammers worked by first falsely registering IP addresses they owned to Internet Service Providers like AT&T, Cox, etc. to make them appear as though they were from American households.

The scammers then created carbon copies of reputable content outlets like ESPN, Vogue, New York Times, and more. Although the fake sites were generally nothing more than a single page shell that would display a video ad, the algorithms used by programmatic advertisers couldn’t tell the difference between the fake sites and the real ones, so the fake sites successfully won many bids for ad space.

Finally, using hundreds of thousands of bots, the scammers generated millions of fake clicks and views on their “ads.” They even go as far as to mimic real human click patterns and mouse movements to trick the bot-detection safeguards put in place by the platforms serving the ads.

Here’s 5 Ways You Can Fight Back:

If reading this so far has scared you a little bit, good – that means you’re paying attention. But I’m not going to sit here and say digital advertising isn’t worth the investment, far from it. What I’m saying is that we can no longer simply throw dollars at various ad channels and assume everything will be okay. We have to be proactive in our approach to combat ad fraud by utilizing every tool at our disposal. Fortunately, there is a wealth of technologies that can help you take action against ad fraud in your digital strategy.

Unfortunately, the game of cat and mouse between scammers and businesses never ends. But, thanks to the technologies we now have at our disposal, we are more prepared than ever to fight back against ad fraud. By leveraging IP address intelligence across your digital marketing strategy, you will be able to more closely monitor your ad spend and ensure that only your desired accounts are served your ads.